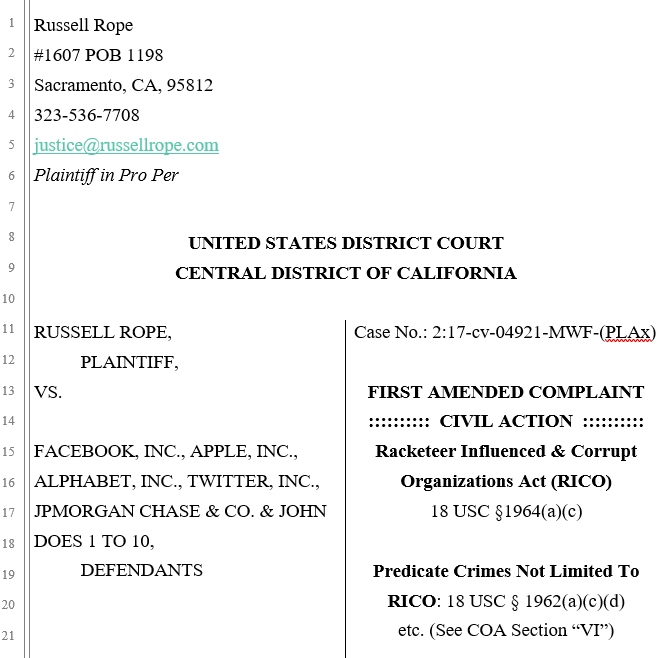 For some dumbass reason, foolish defendants possibly about to be including but not limited to another dishonorable judge, paid to be evil defendant attorneys, and corrupt law enforcement, all think they can get away with bad lies against a much more intelligent but outnumbered pro se (self-represented) plaintiff whose support system has been turned against him through worse than character framing, bribery, and abuse of power over social networking platforms. This tactic is going to fail because truth shall prevail, all it takes for the plaintiff in pro per (self-represented) to win is a good judge, or for a bad judge to turn good, or a good hungry for wealth legal team to take on the case, which would include an entire attorney network and new support system(s). The statute of limitations for RICO is ten years from the most recent violation, which was a stalker last night in addition to coercion by a production company who forced an illegal contract before breaching the initial contract yesterday after the originally agreed upon work had already commenced.

The current RICO lawsuit was recently and illegally dismissed, a motion for reconsideration was denied based on no reason other than irrelevant pleading technicalities, which were corrected only to be denied again without requested explanation given because there is not a legal justification to deny equal protections under the law. More motions can be filed before an appeal to a higher court, similar previous cases can be reopened or appealed in both state and federal court, or new cases can easily be filed against John Does not previously filed against as defendants. Unless defendants including John Does get wise and surrender to the fact that their insanely dishonest and criminal creation of a conflict is one-sided based on their own greed and envy, the legal trill OG is not close to over and several identified John Does will go to prison without ability to acquire legal pardons. Please connect with support, specifically seeking an army of pro bono/contingency attorneys, funding, and publicity. Share this reality.